Information about this upcoming liturgical event in New York City was provided to us by Mr Patrick O’Boyle.

On Sunday, October 4 at 10:00 a.m., an Italo-Albanian Greek Catholic Divine Liturgy will be celebrated at Most Precious Blood Church, 109 Mulberry Street (between Canal and Hester Streets) in the Little Italy section of Lower Manhattan, sponsored by the Sts. Cosmas and Damian Society in honor of their patron saints. The society is composed of immigrants and the descendants of immigrants from the town of San Cosmo Albanese in Calabria, Italy. San Cosmo is one of the many communities formed in southern Italy by Albanian Christian refugees in the 15th century, who were seeking to escape the conquest and persecution of the Ottaman Turks. To the present day, a distinct Italo-Albanian culture continues in parts of southern Italy, with communities that retain many unique customs and dress, the ancient Albanian language and Byzantine Christianity. The Italo-Albanian Rite posses two Eparchies in Italy, at Lungro in Calabria and Piana degli Albanesi in Sicily, as well as the famous monastery of Grottaferrata outside Rome. Their priests can marry, and their liturgical language was Greek up until the time of the Second Vatican Council.

Between 1904 and 1946, the Italo-Albanian immigrants to New York possessed a parish, Our Lady of Grace, which existed in a Lower Manhattan store front, due to the community’s poverty. The parish was under the care of an Italo-Albanian immigrant priest, Papas Ciro Pinnola, who worked under the auspices of the Archdiocese of New York, since the United States did not have an Italo-Albanian Greek Catholic Eparchy of its own. Upon Father Pinnola’s death in 1946, the Archdiocese of New York failed to procure a priest of the rite from Italy to serve the parish, which was therefore closed the parish. (below: external and internal views of the church of the Most Precious Blood.) 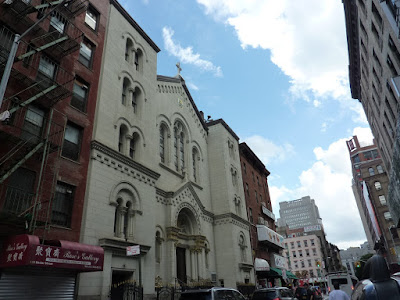 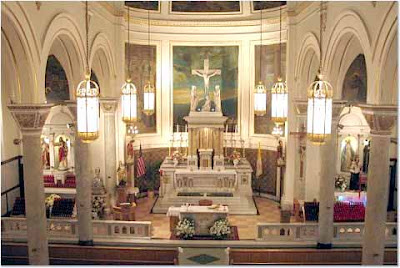 In other major American cities where they settled, Italo-Albanian Greek Catholics were absorbed into Italian national parishes of the Latin Rite. Plans to form their own parishes outside Manhattan never came to fruition, due to the poverty of these immigrant communities and the apparent disinterest of many bishops.

Italian-American Catholics of Italo-Albanian descent have begun working in recent years to reclaim their spiritual heritage. A renewed Italo-Albanian Greek Catholic Society of Our Lady of Grace was formed in New York to promote the Rite in the Northeast; a parish, Our Lady of Wisdom, was formed in Las Vegas under the Byzantine Catholic Eparchy of Phoenix, and occasional liturgies have been celebrated in New Orleans.

In this spirit, the Sts. Cosmas and Damian Society has decided this year, on the occasion of their patronal celebration, to forgo the annual Latin rite Mass held at Most Precious Blood, and instead return to their ancestral tradition and sponsor the Divine Liturgy according to the Byzantine Rite. The Rt. Rev. Economos Romanos V. Russo will serve the liturgy in English (at the Society’s request) assisted by Subdeacon Alexei Woltornist. This is a very rare opportunity to experience the Italo-Albanian Rite that should not be missed.